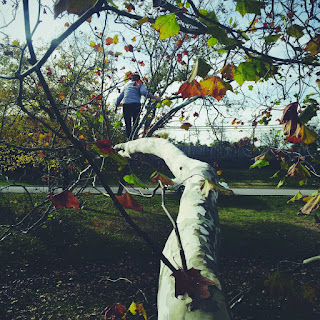 He started climbing without knowing why. His curiosity made him step farther out. His fear of falling made him hang on to the thin branch. The height elevates him. He sees the mad traffic rushing past but it's still calm up there. It’s the same speed at which he has been driving life every day. Those driving by do not notice him, like he never noticed this tree. The road below buzzes with the humdrum of daily life. It runs in the middle of the serene beauty of autumn. Autumn in all its glorious colours - ready to fall - to stop for the winters and then make way for freshness to spring back again. He straightens up, breathes in, his eyes spanning the horizons. He doesn't hear the buzz anymore. He's let go of the branch for he doesn’t need to hang on to it. He feels free. This is the much required pit stop in the crazy formula one that life has become today. He closes his eyes and inhales deeply. He holds it for as long as he can. When he breathes it out, it makes him feel strangely lighter. The unknown had just left him. He was aware of himself, the tree, the edge of the branch that he now stood on. There was no fear. He was certain he was going to take the plunge. With a smile, he lets himself fall…..   The fall tests the roots. The leaves die but the root remains alive. It preserves all that is vital to sustain life. It never surfaces, yet helps bring back that which the naïve eye deems as life. Life continually bears leaves of incidents, some of which grow into a multitude of colours while others simply dry out and drop off. Irrespective, each plays its part.

He's falling. His heart beats louder, thumping against his chest. Inside him. His roots. He realises that is the core. It bears the leaves of every emotion, every feeling. Leaves that rise and fall, fall and rise. He falls to the ground and springs back to his feet. He starts walking towards the road. The din is becoming prominent. But this time he is confident, it wont be able to drown him. He will drive life at whatever speeds it brings on. He knows where to come back to when he needs to feel his roots again, to revive his core, to nurture life. Do you?

Email ThisBlogThis!Share to TwitterShare to FacebookShare to Pinterest
Labels: Prompts